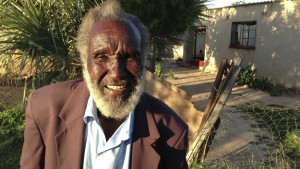 The Trustees and the Phiri Award for Farm & Food Innovators, and the members of Muonde Trust announce with great sadness today the passing (following a massive stroke) of the master himself, the great spirit that was Zephaniah Phiri. He will be buried September 3rd at his home in Mapanzure (Runde).

Born in 1927 Zephaniah lived life to the full – as Church leader, Trade Unionist, Political Activist, Water Harvester, Inspirational Teacher, Lover of All Creation – and he barely slowed down as he went into his eighties.

Asked what he did while in restriction at the notorious Gonakudzingwa Camp in the open bush of a game reserve in the mid-1960s he recently told us he’d started a piggery so that people could eat better. In the same way he had dug his contour ditches while in the leg irons ordered by the legendarily cruel Shabani District Commissioner Shore. That was the man Phiri was.

Indeed in recent years Phiri took to thanking Mr. Smith in his speeches. He would say that from Smith’s inhumanity and Phiri’s vulnerability had come the prayers that had opened his heart to hear the Word of God and enabled him to commit his family’s well-being on the stewardship of his little piece of land.

That love that oozed from his every pore. It was for the frog. It was for the unusual bean variety with which he fixed nitrogen (having long ago rejected fertilizer for its consequences). It was for the birds that nested in his reeds. It was for the people who loved to eat his fish (even though having been forced to eat raw fish under torture he could never enjoy them himself). It was that love, coupled with his humor in four languages and insatiable capacity to engage everyone he met at their deepest level which framed who he was. Nobody who met him ever forgot him.

In part through Mary Witoshynsky’s book with Harare’s Weaver Press, The Water Harvester, Mr. Phiri’s land was already known around the world as an extraordinary “Garden of Eden” even in the 1990s and yet in the 2000s he only re-doubled his efforts to further innovate how water moved and was stored through his complex and deeply ecological engineering. His thirst for listening and learning seemed unquenchable. But he did start to tell us all that his days were numbered.

Some of us tried to tell him otherwise, and it is true that he lived longer than he seemed to think he would, perhaps in part because in his last years came a surge not just in recognition for his discoveries as an Indigenous Innovator, but even more gratifying for him in the widespread adoption of his water harvesting, soil-love and diverse resilient farming systems.

The launch of the Phiri Award for other similar but still unrecognized innovators in 2014, completed the circle of an idea launched at his Lifetime Achievement Award at the University of Zimbabwe in 2010. The films that were made in his last years by Moses Ndhlovu of the Muonde Trust with Obrian Mudyiwenyama. The continued stream of visitors from around the world to see his work, including the reconnection with his old friend Brad Lancaster, whose two volume instructional guide to water harvesting opens with Mr. Phiri’s insights and inspiration. All these brought much joy.

Yet it was something else that led him to say “this is all so exciting, I wish I was young again”. And that was witnessing deep change happening on the ground. Change no longer only on his own farm and those of a few early disciples, but change across whole landscapes and watersheds, especially in his beloved Mazvihwa with his old friends of the Muonde Trust, where hundreds of farmers dedicated themselves not to copying his techniques but to listening to their own soils and applying a range of approaches to “talking with water” and “rhyming with nature” (some of his favorite expressions).

In support of this, and with his wife, Constance, and family, he apprenticed dozens of people – mostly inspired women farmers – on his beautiful farm in well-structured trainings funded by well-wishers from around the world. Indeed he laid out in his last will and testimony that the farm should continue to provide a teaching venue as well as feed his family and the needy (especially orphans). With the assets of the Zvishavane Water Projects, the NGO he founded back in the 1980s, which are bizarrely still tied up in the courts by a group of outsiders seeking to divide them for personal benefit, this training center-farm would be recognized as a national treasure and indeed a fitting legacy.

The last time I saw him – in March as another searingly hot drought ravaged the country – he remarked with a twinkle, “friends, if starvation comes to the land, I can at least be sure that I will have food for three days longer”. A visit to his land found it abundant as always, relying on massive water storage, a thick layer of living plants and deep healthy soils to even out meagre seasons. It is that work and that vision that will live on in the land and hearts of Zvishavane District.

2 thoughts on “The Passing of Zephaniah Phiri, September 1st, 2015”