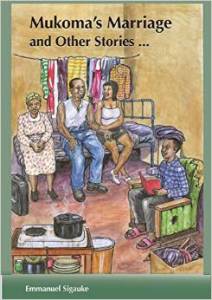 Emmanuel Sigauke, Advisor to the Friends of Muonde, and luminary writer from Mazvihwa has finally published his Mukoma’s Marriage and Other Stories (Booklove Press, available on Amazon here) that are set in the beloved Mhototi villages of Mazvihwa of the 1970s (where he grew up) and ultimately in Glen View Harare where so many of that generation came to dwell in the 1990s. The reviews are of course blazingly positive, not least because the literary fraternity in the shape of no less than Memory Chirere and NoViolet Bulawayo have been braying for its publication for years, as Beaven Tapureta has reported. The collection rightly has Dr. Tanaka Chidora from the University of Zimbabwe in The Herald fascinated by the UNUSUAL angle of narration, the experience of violence and the incredible evocations and resurrections of village life.

It is those powerful evocations of Mazvihwan society, stripped as they are of any dramatized romance or degradation, that inevitably capture the attention of The Muonde Trust. Not only does our storyteller navigate each beloved kopje, school yard, gulley and infamous wild “gonera” bee nest, but even the 1980s the action-research process itself makes a veiled and amusing entry when we learn that the costumes for an ill-fated school play on Julius Caeser “had been the idea of the science teacher, a British expatriate who was studying the thorn bushes of my village”.[1]

Striking in this rollicking and funny text is the unself-conscious honesty of its boy-into-man narrator and his search for a meaningful identity – whether through spirit possession, church roles, excellent English, good fighting, or indeed anything else that might come his way – and especially that might become potentially associated with girls. And meanwhile Sigauke’s story-telling powerfully captures the flow of village sentiment from one interpretation to another where the story is ever-evolving in both facts and meaning. (This actually is mirrored across the mosaic of short stories in this collection in which it is never entirely clear whether they are supposed to constitute a seamless whole).

A brief extract for the flavor of this…. Here Fati, the disarmingly honest book-worm child narrator, reflects on his tragically barren Maiguru (elder brother’s wife) who had spent years being circulated through countless n’angas in search of a cause and/or a pregnancy, and he concludes:

“I had watched the problem wrinkling her face, transforming her from the always laughing woman my brother had married to a stiff-lipped, eye squinting field slave. She battered the soil like it knew where babies hid before they decided to be born.

Then, after seeing how hard she worked on the family farm, the village changed its story: now Maiguru was a valuable wife who gave her husband harvests of maize and millet. The village said, ‘She may not be blessed with children, but look how her husband’s granaries are always choking with grain. He should keep this one no matter what.’ So Mukoma [older brother] had kept her, had even argued that he did not care about other women. Marriage was not always about children, he said, and he shocked the village by announcing that he loved her. Rumours spread about how Maiguru had betwitched him, made him forget what was important, how he was doomed to age without a child to call his own…”[2]

With great sadness shared by people across the world we regret to announce that dear Mr. Zephaniah Phiri passed away on September 1, 2015.
Scroll to Top